Kellogg's was originally founded as the Battle Creek Toasted Corn Flake Company in 1906. The company's founder Will Keith Kellogg is credited with inventing corn flakes along with his brother John Harvey Kellogg. The company was renamed the Kellogg Company in 1922. Since that time, Kellogg's has become a multi-national producer of breakfast foods, snack foods, cookies and crackers. 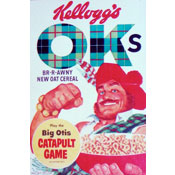 Cereal Spotlight:
OKs Cereal
Introduced in 1959
OKs Cereal was promoted as "the best in oats". The cereal pieces came in the shapes of the letters "O" and "K" and were said to taste similar the Cheerios. In fact, most cereal-historians believe OKs Cereal was a failed attempt by Kellogg's to nab some of the market from General Mill's very popular Cheerios... Read More

Barbie As The Island Princess

Country Morning With Raisins And Dates

Pirates of the Caribbean

X-Men 2
For more about Kellogg's, visit their official website.