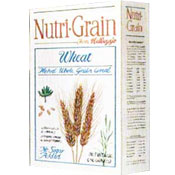 
This cereal was available in the following varieties: Almond Raisin, Rye, Corn, Barley and Wheat. Advertised as "Nutri-Grain... a whole grain different" and "No spoon has ever held more grain goodness". Kellogg's touted the cereal as "the first line of flaked, whole grain cereal with no sugar added".

No longer available in the U.S., a version of this cereal is still sold in Australia.

Nutri-Grain: The One I Love
Additional Images 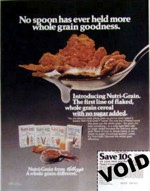 Submitter: mustard
Uploaded: 7/30/2009
Additional details
Upload an image for this cereal
Comments About This Cereal
What do you think of Nutri-Grain?

What ever happened to the original Nutri Grain cereals i.e. wheat, corn, and rye that were touted as a breakthrough in technology and oh so healthy? I recall how delicious they were back in the 1980s. Then suddenly they were no more in the USA.

We should vote to Kellogg's to re-market this here.

The original, unadulterated cereal was great! Then they added sugar, which as a diabetic, I found intolerable. I quit buying it. Then they replaced the sugar with chemicals (artificial sweeteners) which are also intolerable. I still didn't buy it. Then it disappeared from the shelves. I wonder why.

This was my favorite cereal growing up. I have looked high and low for it since only to learn that the line has been dropped. I'm totally bummed... Please come back!

I wish that the Nutri-Grain almond raisin would return to the United States. I have blood sugar issues and it has a great taste that I miss. I cannot find anything else that compares to it so I just don't have cereal anymore. Still wishing here in Texas!

Bring it back. Yummy and healthy.

The corn version was my favorite growing up. Hunted high and low for a substitute... Nothing comes close. Hoping for a comeback.

I'm a diabetic and this cereal is the best in the world for a controlled sugar reading. I cannot find any others that taste good and does great on my diabetes. Shame on them for not selling it anymore in the U.S.

By One N. Only

I loved the Almond Raisin variety! I wish they would bring it back as I have not found anything comparable.

This stuff was gross. Thin yucky flakes which turned soggy in 10 seconds and then you have a bowl of wheat goop. I hate you, Nutri-Grain. I am so glad you are dead.