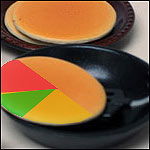 On this page, you'll find news items associated with breakfast. Most significant are research studies that point to the importance of eating a healthy breakfast. You can also refer to this page for information regarding the latest news and trends associated with breakfast products and restaurants that serve breakfast. The items are listed starting with the most recent. If you have information that might be pertinent to this page, please email Mr Breakfast.

For additional information about the benefits of breakfast, please see the Mr Breakfast Library.