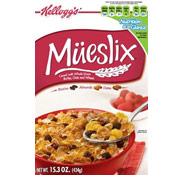 
This cereal was described on the front of the box as a "cereal with whole grain barley, oats and wheat - raisins - almonds - dates." 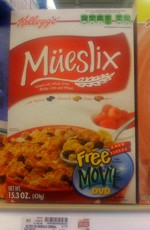 Submitter: Mr Breakfast
Uploaded: 4/26/2009
Additional details
Upload an image for this cereal
Comments About This Cereal
What do you think of Mueslix?

This is really a tasteless cereal. It lacks an authentic and unique flavor like Basic 4 which is the best of its kind.