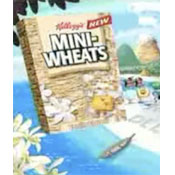 
This cereal was introduced with a television commercial showing a piece of the cereal happily prancing around in a tropical setting. This is the song he sang:

My little story takes place at a tropical villa
I fell in love with a flavor. Yes, it was vanilla.

Now Showing: Introducing Vanilla Mini-Wheats Commercial
Upload an image for this cereal
Comments About This Cereal
What do you think of Mini-Wheats: Vanilla?

This was my favorite cereal and now it is gone. Are they going to bring it back?!