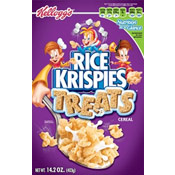 From: Kellogg's
Introduced in 1993


This cereal was described by the company as follows:

A voice-over from a 1994 TV commercial described the cereal like this:

Rice Krispies Treats Cereal has been reviewed on MrBreakfast.com. 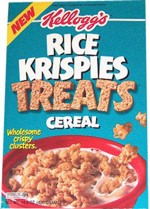 Submitter: leprican_katie
Uploaded: 4/19/2009
Additional details
Upload an image for this cereal
Comments About This Cereal
What do you think of Rice Krispies Treats?

I really miss these. They tasted so good, I even ate them dry out of the box. Not sure why they thought it was a good idea to take these off the market.

Mmm, so good! I remember my dad loved this cereal and we always got it whether we had a coupon or not. :p

The only sweetened cereal I have ever had that I do not like. It just has a weird chemical taste.

I think y'all should put this cereal back on the market. This was my favorite cereal. I've been searching all over for this cereal.

This is some seriously delicious cereal. To quote South Park: "I'm super cereal." Love it!

It was July 29th 2013... I was craving Rice Krispies bars. I went to the store and got 2 boxes thinking the rest of the family may want me to make them some to. I was lucky because I opened and used one box to make mine and after making them I broke off a piece while they were cooling and bit on this strange thing in my mouth. I thought it was a tooth. I had just had a tooth pulled and thank God it didn't go up in that hole where the tooth was pulled. I took what I was waiting for (a tooth) out of my mouth and there was a hard piece of metal!

This is one of the best cereals of my time and I'm only 27 lol. I loved this cereal so much I think I'm going to write to Kellogg's and ask them to remake it in the the same Turquoise box. Greatly missed.