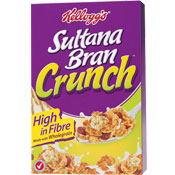 
This cereal is available primarily in the U.K. and Australia. It's their version of Raisin Bran Crunch. The box indicated that it is "high in fibre (and) made with wholegrain."

Company Description: Kellogg's was originally founded as the Battle Creek Toasted Corn Flake Company in 1906. The company's founder Will Keith Kellogg is credited with inventing corn flakes along with his brother John Harvey Kellogg. The company was renamed the Kellogg Company in 1922... Read on and see all cereals from Kellogg's
This cereal belongs to the following Mr Breakfast Cereal Families:
Upload an image for this cereal
Comments About This Cereal
What do you think of Sultana Bran Crunch?
By Matthis

Does anyone know where this is sold in Germany?

By Screw In My Bowl

I am a huge fan and have always loved Sultana Bran and as I poured it into my bowl of cereal this morning... a screw came out of the box and into my bowl. I was horrified at this and have taken photos as evidence. What is the reasons for this?!