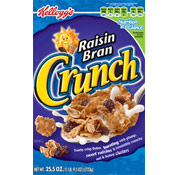 
The March 24, 1999 edition of The Beacon News described it like this, "Kellogg has taken its Raisin Bran, added some oat and honey granola clusters and come up with Raisin Bran Crunch."

In 2010, the cereal was described on the box as "craveable & crunchy - tender raisins, crunchy flakes and tasty clusters."

Company Description: Kellogg's was originally founded as the Battle Creek Toasted Corn Flake Company in 1906. The company's founder Will Keith Kellogg is credited with inventing corn flakes along with his brother John Harvey Kellogg. The company was renamed the Kellogg Company in 1922... Read on and see all cereals from Kellogg's
This cereal belongs to the following Mr Breakfast Cereal Families:
Raisin Bran Crunch Cereal Theater

Rasin Bran Crunch Taglines Ad
Upload an image for this cereal
Comments About This Cereal
What do you think of Raisin Bran Crunch?

OMG! I have always been a Honey Nut Cheerios kind of girl, but for no special reason, I bought a box of Raisin Bran Crunch Cereal and am totally switching over! DELICIOUS! And shhhh... good for you too! General Mills stock just dropped! - Arlene from Maryland

I love this cereal! Tastes just like oatmeal cookies with milk. The raisins give this cereal just the right amount of sweetness and the granola clusters are the perfect addition to an awesome cereal!

This cereal is genius. It's like eating a bowl full of oatmeal cookies. I can even taste a little bit of honey in it.

This is the best cereal on the face of the earth. It doesn't get soggy like Raisin Bran, it has yummy granola clusters, it has tons of fiber, and it's delicious!

A little too much sugar, but otherwise, this is a very tasty cereal. The newest Raisin Bran with almonds and cinnamon is very good too.

This may be the best cereal introduced in the last decade, there's not 1 person who dislikes it as far as I know.