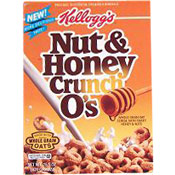 
This cereal was described on the box as a "whole grain oat cereal with sweet honey & nuts." It was very similar to General Mills' Honey Nut Cheerios Cereal in flavor, taste and texture.

The back of one box offered classic holiday videos for $5.95 each. The films offered were "It's a Wonderful Life" and "A Christmas Carol".

We believe the Nut & Honey Crunch O's first appeared in stores in 1992. That's the date on the earliest cereal box we've found and the date of it's earlier TV commercial appearance (known to us) where it was advertised along with its flaked cereal brother, Nut & Honey Crunch, minus the "O's".

Another cereal called Nut & Honey Crunch Biscuits was also made by Kellogg's.

Upload an image for this cereal
Comments About This Cereal
What do you think of Nut & Honey Crunch O's?

Please make this cereal again and distribute it in Columbia SC walmarts! It was my absolute favorite growing up!