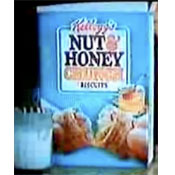 A business man is sitting down to breakfast as his wife, Wanda, pours him a bowl of a new cereal.

Man: What's for breakfast my pet?

Man: Hey, that's not Nut & Honey. Those are biscuits.

Man: You mean there's nothing in those biscuits, honey?

Wanda: No honey, I mean there's Nut & Honey in the biscuits, honey.

Wanda: In the biscuit.

Man: In the biscuit?

Man: Hey Wanda, there is something in this biscuit.

Don't remember them, but think I would have liked them. I liked the other Nut & Honey Cereal with the famous Nuttin' Honey commercials.

This cereal came out in 1988. The back panel asked "What's so special about our biscuits ? Nuttin' Honey"