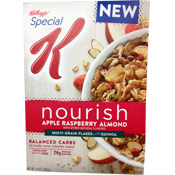 The back of the initial box of Apple Raspberry Almond Nourish gave this description: "Abundant goodness in every bite. This crafted mix of multigrain flakes made with quinoa, wholesome granola, sliced almonds, delicious apples and raspberries gives you 24g whole grain, an excellent source of fiber and a blend of unique flavors and nutrition that'll NOURISH you." 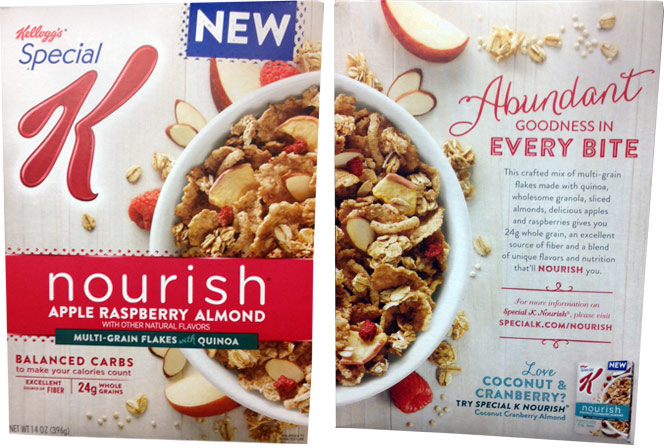 Upload an image for this cereal
Comments About This Cereal
What do you think of Special K Nourish?

I live in Ohio and I can't find the coconut, cranberry almond Special K cereal and Kellogg's Special k cereal apple, raspberry and almond in my grocery stores Meijer, Marc's, Krogers, Target. Why would they get rid of a good cereal. I even got my husband to eat it. I hope they bring it back in the grocery stores. I would rate it awesome if it was in the stores.

Coconut and cranberry Nourish has been the only cereal I ate for the past two years. All of a sudden I can't find it anywhere in my area. Please please tell me where I can find it. Not at Publix, Winn Dixie or Wal mart. I live in the Villages, Florida.

Just stay with original Special K. Stop ruining a product by adding everything but the kitchen sink.