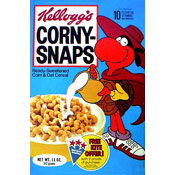 From: Kellogg's
Introduced in 1975


Corny-Snaps were described on the box as a "ready-sweetened corn & oat cereal." The cereal pieces had a Cheerios-type color and texture. They were curly - like the warped letter "S" or a misshapen Cheeto.

Shelly the Turtle (aka Snappy)

This character began representing Corny-Snaps Cereal in 1976. According to cereal mascot expert Topher, Shelly was originally a grumpy character and kids would try to make him smile.

Around the end of 1977, Shelly was transformed into a Zoro-type character. There are reports that he went by the name Snappy after the change. 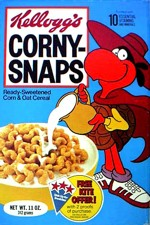 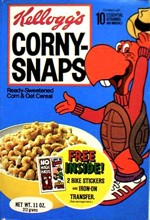 Submitter: jeffrey
Uploaded: 8/14/2010
Additional details
Upload an image for this cereal
Comments About This Cereal
What do you think of Corny-Snaps?

My all time favorite discontinued Kellogg's cereal! Sweet and super crunchy! Nothing fancy, just delicious! Bring it back Kellogg's!

I ate the cereal very often as a child. I loved it. It was my favorite cereal for a time. Why did they discontinue it? BRING IT BACK Kellogg's!

As a child I loved Corny-Snaps! It tasted so great. Good flavor and consistency. Wish it was never discontinued.

I LOVED this stuff as a kid! I just remember it having the best flavor. If its ever re-released I'm buying a CASE!

I have been trying to remember the name of this cereal forever!! All I could remember was Snappy (not his name but that he was a Zorro-style turtle). I loved this cereal, even though it was so crunchy it would tear up the roof of your mouth!

This cereal was the best with or without milk. Me and my siblings loved eating this while watching Saturday morning cartoons. Those were the good old days. CORNY-SNAPS :)

Corny Snaps was the best cereal I ever had. When I was a kid, I used to eat it every day. I loved that cereal. They should bring it back.

By Bring Back Snaps

Corny snaps was the best cereal I have ever tasted. It stayed crunchy until you finished the very last one. It also tasted great. They really should bring it back. I think kids today would love them.

One of the most crunchy and delicious cereal ever made. I would love it if they bring it back CORNY SNAPS FOREVER!

Me - scarfing down bowls of Corny Snaps! My big brother - 'I know you just chose it for the lame character on the box.' Me - 'Did not!' Of course, he was right. That's totally why I chose it. It was the Turtle as Zorro version. Loved it!