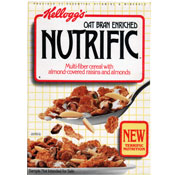 
The complete name of this cereal was Kellogg's Oat Bran Enriched Nutrific. It was described on the box as a "multi-fiber cereal with almond-covered raisins and almonds."

The back of the original box gave an in-depth description:

"If you're tired of humdrum fiber cereals, we've got something really exciting in store for you. Introducing Kellogg's Nutrific... a truly different fiber cereal because it tastes absolutely terrific!

"Nutrific's breakthrough taste comes from its delicious and unique combination of flakes, raisins and nuts.

"Our terrific flakes are no ordinary flakes! They're a hearty, crispy blend of wheat bran, corn bran and barley. And they're enriched with oat bran, which contains a special kind of fiber.

"Our terrific raisins aren't just ordinary raisins! They've been rolled in a coat of ground almonds so they're nutty on the outside, tender on the inside.

"And terrific golden almond slivers top it all off to give you a great tasting fiber cereal!

Upload an image for this cereal
Comments About This Cereal
What do you think of Nutrific?

I enjoy Nutrific better than Wheatbix. I tend to suffer from bloatedness and have been told it's due to the wheat contents in Nutrific. Need suggestion if Kellogg's Frosties won't be a better option? - Yunus