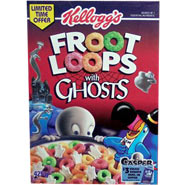 From: Kellogg's
Introduced in 1995


Froot Loops With Ghosts was a limited-edition, Halloween-themed cereal that was available in Canada. We believe it appeared in stores in 1995. The cereal consisted of traditional Froot Loops pieces and white marshmallows shaped like ghosts.

The box featured a $3.00 rebate for the video of the 1995 film Casper starting Christina Ricci and Bill Pullman.

We've seen conflicting reports that the cereal came out in either 1995 or 1997. The movie Casper was released in May of 1995. It stands closer to reason that the video version would be promoted 6 months after the theatrical release (in October 1995) rather than 2 years later. Therefore, we list the date as 1995.

Submitter: Bilbo B.
Uploaded: 10/12/2013
Additional details
Upload an image for this cereal
Comments About This Cereal
What do you think of Froot Loops With Ghosts?
There are no comments yet for this cereal. Be the first! Was it good? Was it bad?
Do you have information not included in the article? Let the world know!