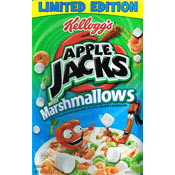 
This cereal is described on the front of the box as a "crunchy sweetened three-grain cereal with apple, cinnamon and marshmallows." When the cereal first came out, the box indicated that it was a limited edition product, but the cereal has since been produced without the limited edition signifier. 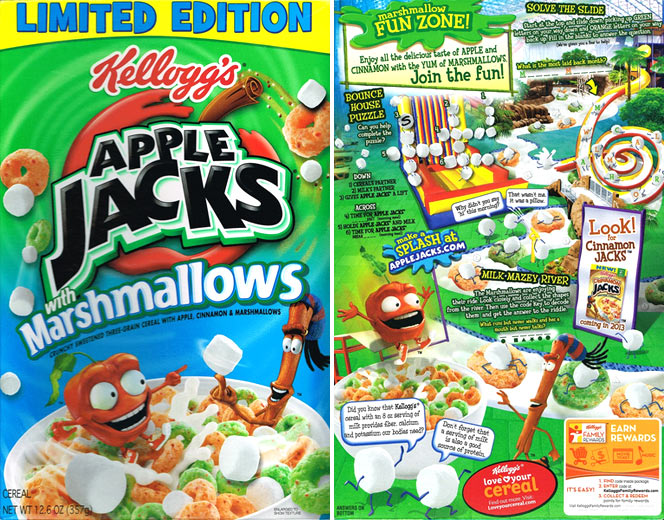 Company Description: Kellogg's was originally founded as the Battle Creek Toasted Corn Flake Company in 1906. The company's founder Will Keith Kellogg is credited with inventing corn flakes along with his brother John Harvey Kellogg. The company was renamed the Kellogg Company in 1922... Read on and see all cereals from Kellogg's
This cereal belongs to the following Mr Breakfast Cereal Families:
Upload an image for this cereal
Comments About This Cereal
What do you think of Apple Jacks With Marshmallows?

Bought this cereal every week and now it's extinct. Where did it go? Won't buy the Apple Jacks without the marshmallows.

Love it! But I can't find it anywhere. Where in the world can I purchase/buy this cereal?

I love this cereal! Apple Jacks has been my favorite cereal all my life, and now with added marshmallows, it's even better! I was very excited to see this marshmallow version again, but I'm now having trouble finding where to buy. Please, please make this version a regular product. I will buy it every week! Thank you Kellogg's!