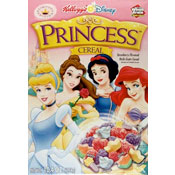 
This cereal was described on the box as a "strawberry flavored multi-grain cereal". It consisted of purple and pink heart-shaped pieces and marshmallows in the shapes of wands, roses, crowns and castles.

In 2017, Kellogg's introduced an updated version of this cereal under the name Disney Princess Cereal. The new version also had 4 different box versions with Rapunzel and Jasmine replacing Snow White and Cinderella. The 2017 cereal was also strawberry flavored, but was less colorful and had fewer marshmallow shapes.

Company Description: Kellogg's was originally founded as the Battle Creek Toasted Corn Flake Company in 1906. The company's founder Will Keith Kellogg is credited with inventing corn flakes along with his brother John Harvey Kellogg. The company was renamed the Kellogg Company in 1922... Read on and see all cereals from Kellogg's
This cereal belongs to the following Mr Breakfast Cereal Families:
Upload an image for this cereal
Comments About This Cereal
What do you think of Princess?

Much better than the new rendition. This version had more strawberry punch and tasted like strawberry cake mix. My go-to in college - enough so that my roommates razzed on me.

Ahh... this was the cereal of my childhood! I wish it wish it was still around, because I can't find any other cereal as good as this one.

They must sell this somewhere because the Cereal Cafe in London has it :D

Please bring this cereal back! It was my husband's favorite. I am still looking for a cereal like Princess religiously. I would give almost anything to find this for him!

I wish Princess Cereal would come back. It was my favorite cereal when I was little and I don't understand why people don't make it anymore. I know if they brought it back it would sell really well. So I would recommend... bring it back... Please!

I would like this cereal to be sold in Tesco again.

This cereal was so yummy. I wished they would bring it back. Even my Boyfriend would eat in when I bought it and he is a quite manly guy. It was always a little joke between us. Been looking for it for years.

Shoot... I wish this was still around. My girl (7) doesn't like to eat breakfast, but she did like the Barbie cereal that was out last year. She would probably like this one too. Princesses for my princess!

This was my favorite cereal, upsetting the long-running first-place holder, Berry Berry Kix. And for a 29-year-old woman, that's saying something. I was brokenhearted when it was discontinued!