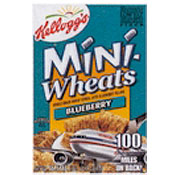 
Not to be confused with Blueberry Muffin Mini-Wheats (2008), the cereal had blueberry flavor within the biscuit cereal pieces, as opposed to a frosting on top.

It was mostly available in non-U.S. markets.

Upload an image for this cereal
Comments About This Cereal
What do you think of Mini-Wheats: Blueberry?
There are no comments yet for this cereal. Be the first! Was it good? Was it bad?
Do you have information not included in the article? Let the world know!