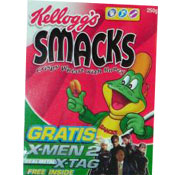 In certain non-U.S. markets, it's known simply as Smacks. Throughout the 90's, it also appeared in U.S. stores under this name.

The cereal is currently called Honey Smacks in the U.S.

Upload an image for this cereal
Comments About This Cereal
What do you think of Smacks?
There are no comments yet for this cereal. Be the first! Was it good? Was it bad?
Do you have information not included in the article? Let the world know!