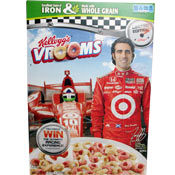 
This limited edition cereal was described on the box as a "frosted multigrain cereal with red-circle fun!" Introduced on August 19, 2012, three different boxes were available. One featured Scottish racing car driver Dario Franchitti, winner of the 2007, 2010 and 2012 Indianapolis 500. Another featured Scott Dixon, a driver from New Zealand who won the 2008 Indianapolis 500. The third featured Juan Pablo Montoya, a Columbian driver who finished in the top 10 in a couple of races. When the cereal came out, all three drivers were part of the Target Chip Ganassi Racing Team. The cereal was available exclusively from Target stores.

The back of the Dario Franchitti box had this quote from the driver: "My first memory of racing happened when I was about 10 years old. I was lucky enough to win the first race - and I think maybe that win had something to do with me wanting to continue to compete. I vividly remember getting the the trophy and I still have it on the mantle because it means so much to me. In college in Edinburgh, I became interested in karting (small, open, four-wheeled vehicles) and I haven't looked back since!" That quote was followed up with this promotional text: "Dario got his great start in racing. Get your great start every day with a Kellogg's breakfast!"

All three boxes offered consumers the chance to "win the ultimate racing experience!"

The cereal itself consisted of tan and red O-shaped pieces, similar in both shape and flavor to General Mills' Cheerios cereal. Despite the red O's and the box's declaration of "red-circle fun", there was no berry component or any flavor you might associate with red cereal pieces. 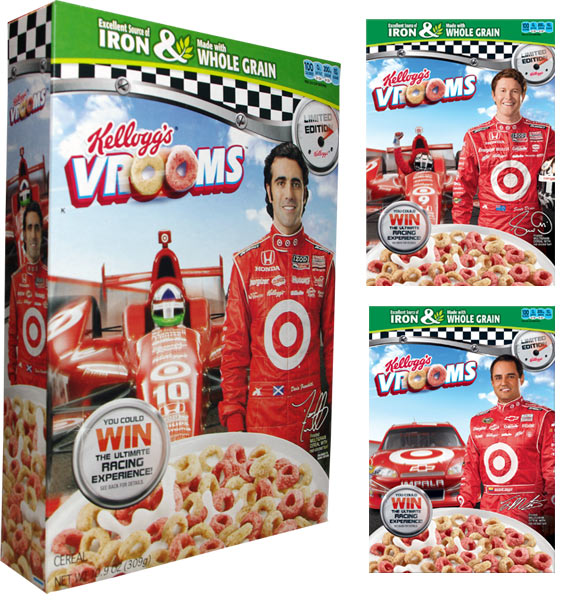 Upload an image for this cereal
Comments About This Cereal
What do you think of Vrooms?

Bought 12 boxes when we found it on clearance. I love this stuff, wish I would have bought them all. Found them for $1.00 a box.

I am crazy about this cereal! I noticed it on sale at Target and thought I'd give it a try. I am glad I did. I saw it was a limited edition so I bought up a few boxes. Now I can't find it. I hope it isn't gone for good.

I actually love this cereal... I had it out in Arizona while on vacation. Now, back home in Illinois, I haven't found it... but I don't live close to a Target... they need to get it offered in other stores :(