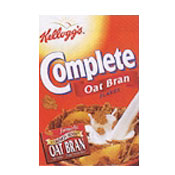 Company Description: Kellogg's was originally founded as the Battle Creek Toasted Corn Flake Company in 1906. The company's founder Will Keith Kellogg is credited with inventing corn flakes along with his brother John Harvey Kellogg. The company was renamed the Kellogg Company in 1922... Read on and see all cereals from Kellogg's
This cereal belongs to the following Mr Breakfast Cereal Families:
Upload an image for this cereal
Comments About This Cereal
What do you think of Complete Oat Bran Flakes?

This was far better than the wheat variety. Used to buy it at Meijer, but they no longer have it.

This was the healthiest and one of the tastiest breakfast cereals ever created. How it was discontinued for declining sales remains one of the modern world's great mysteries.

Struggling to find this product at major Tesco Stores. Where is it sold, please?

I love this cereal, but no one sells it in the Stillwater, Oklahoma area. Why? It makes the best oat bran muffins, too.