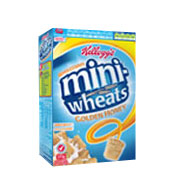 
The complete name of this cereal was Wholegrain Golden Honey Mini-Wheats. It was primarily available in Austraia and some other non-U.S. markets.

We know the cereal was around in 2008. It appears to have been discontinued. It no longer appears in the current cereal section of Kellogg's Australian website.

Upload an image for this cereal
Comments About This Cereal
What do you think of Mini-Wheats: Golden Honey?
There are no comments yet for this cereal. Be the first! Was it good? Was it bad?
Do you have information not included in the article? Let the world know!