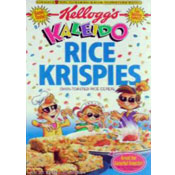 From: Kellogg's
Introduced in 1995


This limited edition version of Rice Krispies contained pieces colored "radiant red, sunshine orange, leaf green and ocean blue." The colors were so bright that Snap, Crackle & Pop had to wear sunglasses on the cereal box.

Upload an image for this cereal
Comments About This Cereal
What do you think of Kaleido Rice Krispies?
There are no comments yet for this cereal. Be the first! Was it good? Was it bad?
Do you have information not included in the article? Let the world know!