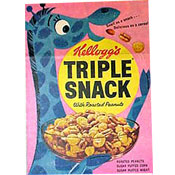 From: Kellogg's
Introduced in 1963


Promoted with lines like "Swell as a cereal... delicious as a snack". This "cereal" contained roasted peanuts, sugar puffed corn and sugar puffed wheat. According to ads, "Triple Snack will get you if ya don't watch out!"

According to a couple sources, the first mascot for the cereal was Boo Boo Bear, better known from Hanna-Barbera Yogi Bear cartoons. We've found no visual evidence to support that claim. The mascot picture on this page is a blue giraffe. His (or her) name is unknown to us at this time. 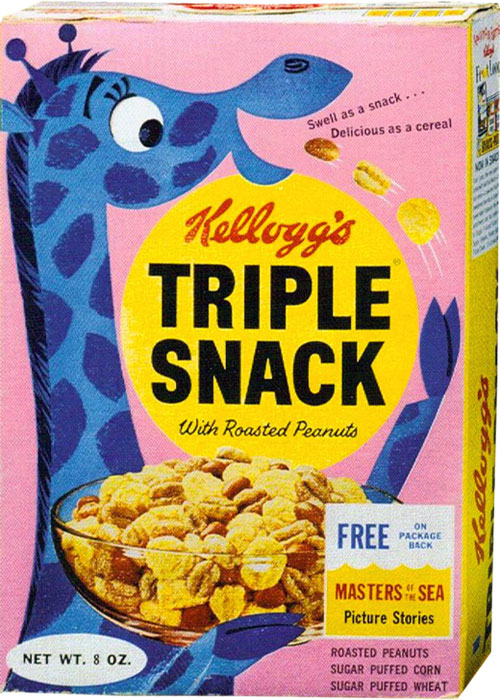 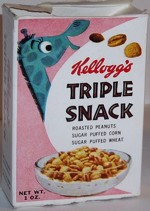 Submitter: DeeJay
Uploaded: 12/11/2008
Additional details
Upload an image for this cereal
Comments About This Cereal
What do you think of Triple Snack?

Was my favorite cereal as a kid. Seemed like it wasn't around very long.

I remember Triple Snack as a kid and it was GREAT! I was really disappointed when Kellogg's stopped making it. The commercials for it on YouTube feature a kid in a pith helmet singing to a giraffe, which I never saw. The commercial I DO remember seeing featured the giraffe singing. His song began, "I'm sticking my neck out for new Kellogg's Triple Snack..." That version of the commercial seems to be lost. Like Triple Snack itself, I sure do wish I could experience that commercial again!

I remember an elephant being pictured on box (makes sense, no?) and the cereal itself having only peanuts and Sugar-Crisp-like puffed rice.

Can it be found anywhere anymore? I have fading memories of it being wonderful.

I can verify from my razor-sharp childhood memory that Boo Boo Bear was indeed pictured for a time on Triple Snack boxes.

I ONLY remember Boo-Boo Bear being on the box and only ever seeing this in the single-serve box collections. Loved this cereal!

I have always remembered that as a small child my favorite cereal had a giraffe on the box and had peanuts in it, but then they stopped making it. I've thought about it over the years, wondering if I would ever be able to find out what it was. I just googled it and found it! This is so surreal! It was discontinued in 1965 when I was 6 years old, but I never forgot how much I loved that cereal with the peanuts in it!

The best cereal ever.

AWESOME. I remember eating this as a kid.

Great right out of the box or amazing with milk. I'm going to get hold of some peanuts, Corn Pops and Honey Snacks and try mixing my own for breakfast this weekend.