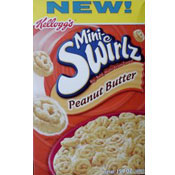 From: Kellogg's
Introduced in 2006


This peanut butter flavored cereal was described on the box as a "big, bold multi-grain cereal." The cereal pieces were shaped like little bakery cinnamon buns, which makes sense when you consider the original version of Mini Swirlz cereal was called Cinnamon Bun Mini Swirlz.

Mini Swirlz - Peanut Butter Cereal has been reviewed on MrBreakfast.com.

Click here to read the review.
Upload an image for this cereal
Comments About This Cereal
What do you think of Mini Swirlz - Peanut Butter?
There are no comments yet for this cereal. Be the first! Was it good? Was it bad?
Do you have information not included in the article? Let the world know!