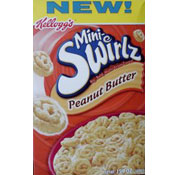 Mini-Swirlz Peanut Butter is a good cereal, but the flavor is nothing new. In comparison to a more kid-oriented cereal like Peanut Butter Cap'n Crunch, the flavor here is only a smidgen more peanut-butter-authentic. Like Mini-Swirlz Cinnamon Bun, the cereal pieces maintain a respectable crunch even after several minutes of soaking in milk.

On the side panel of the box, a pre-teen girl in a striped shirt has a thought bubble jetting out from her head. The question she asks is "Flavor to the 10th power?" Sorry honey. The correct answer is flavor times 1.07 - which isn't too bad.

If you're in the mood for a peanut butter flavored cereal, give this one a try. I'm betting that you'll like it. If you're choosing between varieties of Mini-Swirlz cereals, go for Cinnamon Bun. It's way better.

Comments About This Product Review
What do you think of Mini-Swirlz Peanut Butter?
By cc

This is my all time favorite cereal!!! The only thing is that I can eat about three bowls and still crave more.

I disagree it's a smidgen better than peanut butter cap'n crunch. I've always enjoyed that cereal, and I thought the taste of this blew that one out of the water.

I tried these and thought they were great.