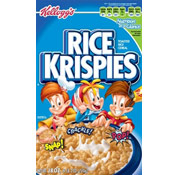 From: Kellogg's
Introduced in 1928


Rice Krispies are made of crisped rice (rice grains that are cooked, dried and toasted), and expand forming very thin and hollowed out walls that are crunchy and crispy.

In May 2008, Kellogg's celebrated the 80th anniversary of Rice Krispies - the famous "talking cereal" with "Snap! Crackle! and Pop!". As part of the celebration, Kellogg's issued a press release with a fairly comprehensive history of the cereal. What follows is that press release in its entirety:

BATTLE CREEK, Mich., May 8 /PRNewswire/ -- Since 1928, parents and children have been lending an ear to the cereal bowl to hear the familiar sounds of the famous "Talking Cereal." This year, Kellogg's Rice Krispies celebrates 80 years of delivering magical moments to breakfast tables everywhere.

Rice Krispies cereal quickly became a family favorite, delighting millions of Americans with its simple and delicious taste. When Rice Krispies entered the market in 1928, everyone noticed the distinctive noise the toasted rice cereal made in milk -- and an idea for the company's first (and longest lasting) spokescharacters was born. Snap! Crackle! & Pop! first hit the front of cereal boxes in the 1930s and have continued their Kellogg career in advertisements ever since.

"We're proud that Rice Krispies cereal has been a part of the childhood of so many generations of consumers," said Mark Baynes, chief marketing officer for Kellogg. "The Rice Krispies brand continues to grow and evolve, yet it's still the same cereal that parents and grandparents have loved since they were kids."

"Today the Rice Krispies brand is dedicated to fostering the connection between parents and kids by helping them discover opportunities for quality time whether at the breakfast table or during other parts of their daily routine," said Baynes. "We're very excited to celebrate 80 years of being part of those shared memories. We hope that consumers have enjoyed sharing the magic of Rice Krispies for the past 80 years as much as we've enjoyed bringing it to them."


- - - - - - - -
Fun Fact: In 1942, Kellogg's fired the creator and longtime illustrator of the Snap! Crackle! and Pop! characters, Vernon Grant, after he had trouble working with a new advertising team. That's not a very fun fact... yet. Grant then sued Kellogg's for control over the famous characters. The court ruled in Kellogg's favor and issued the following statement:

"Snap Crackle and Pop never had any personality or characteristic except as Rice Krispies salesmen. They lived no life like Mutt & Jeff, Buster Brown and dogg, Jiggs, Superman, Betty Boop, sparkplug and other inhabitants of the comic strip world... they had no significance except as decoys to beguile the public into reading about Rice Krispies."

Monkees Kelloggs Promo
▶ There's more! See All Videos For Rice Krispies
Additional Images
These are the most recent images. Click here to see all pictures for Rice Krispies. 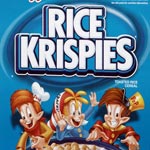 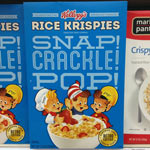 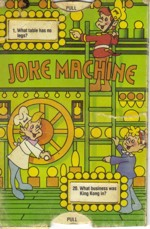 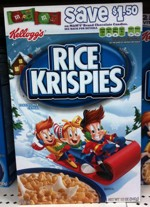 
Upload an image for this cereal
Comments About This Cereal
What do you think of Rice Krispies?

Where in the UK are they made please?

Almost every morning, I have Rice Krispies when we have them in the house.

I ate these growing up. I'm going on 67 and I still eat them quite often.

The cereal is quite nice but I think the taste was a bit too plain and bland, so I added some marshmallows and rainbow sprinkles, and then it turned out pretty scrumptious! I reckon you should try that too and see if you like it! ;)

Accept no substitutes, this is a timeless Kellogg's classic that deserves the biggest breakfast bowl you can find!

I do think that this cereal is nice but because it is so bland, my 6 year old always wants to add more sugar. I think that this shouldn't have to be done, therefore I only rate this cereal as okay. However, the snacks and cakes that can be made with Rice Krispies are nice and tasty.

The snap crackle and pop are appealing, as well as making rice crispy treats with this cereal. The taste of just the cereal with milk is very plain and unappealing, however. This cereal is much better supplemented with honey, agave nectar or sugar, so I don't see why this is so highly rated. The milk afterward isn't very good and they get soggy quickly as well. Would you seriously choose this over Cinnamon Toast Crunch? Waffle Crisp? Count Chocula?

Honestly, just eating this cereal with milk -- I can't do. It is so bland, even with a little sugar. I really only use this cereal to make treats! (myemptycanvasreviews.blogspot.com)

There's a reason why it has lasted so long - it's an amazing cereal! My children love it, too.

I voted for this as my favorite cereal. Can't beat Snap! Crackle! Pop!