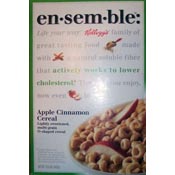 
Ensemble Cereal was unveiled in March of 1999 as part of a product line touted to lower cholesterol. The Ensemble line consisted of 21 products including cereal, frozen entrees, bread, potato crisps and cookies. The products contained psyllium, a fiber that was clinically proven to reduce cholesterol.

Less than a year later - in December of 1999, Kellogg's discontinued the Ensemble product line citing poor sales as the reason.

Submitter: jeffrey
Uploaded: 10/27/2010
Additional details
Upload an image for this cereal
Comments About This Cereal
What do you think of Ensemble?
There are no comments yet for this cereal. Be the first! Was it good? Was it bad?
Do you have information not included in the article? Let the world know!