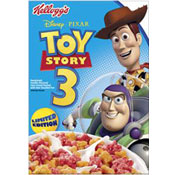 From: Kellogg's
Introduced in 2010


This limited edition cereal was described on the box as a "sweetened, vanilla-flavored corn cereal with star-studded fun." It was produced as as a promotional tie-in for the Disney Pixar animated 2010 film Toy Story 3.

The characters on the front of the box are Buzz Lightyear (voiced by Tim Allen in the film) and Sheriff Woody Pride (voiced by Tom Hanks). 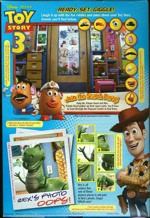 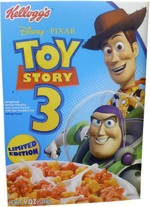 Submitter: Mr Breakfast
Uploaded: 8/26/2010
Additional details
Upload an image for this cereal
Comments About This Cereal
What do you think of Toy Story 3?
There are no comments yet for this cereal. Be the first! Was it good? Was it bad?
Do you have information not included in the article? Let the world know!