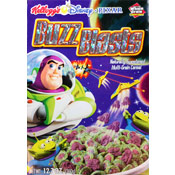 
Buzz Blasts Cereal emerged in supermarkets at the same time as two other Kellogg's cereals - Mickey's Magix and Hunny B's. The trio of cereals resulted from a multi-year alliance between Kellogg's and The Walt Disney Company.

In a press release announcing the cereals, Buzz Blasts were described as having "multi-colored flying saucer cereal shapes that 'orbit' around Buzz Lightyear, the aliens and rocket-ship graham pieces. A Buzz adventure continues on the back of the cereal box". 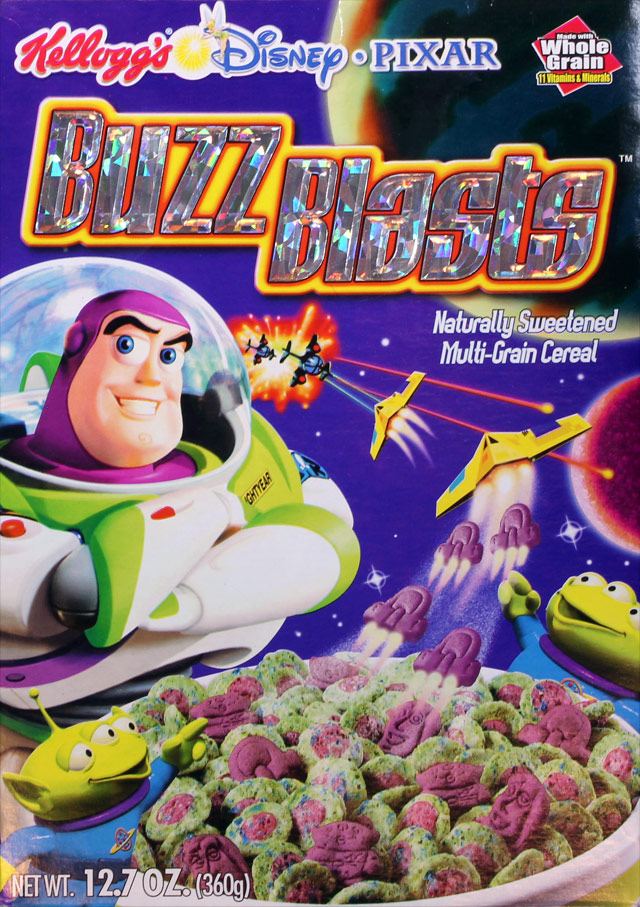 The character Buzz Lightyear is from the 1995 animated film Toy Story and the sequels Toy Story 2 in 1999 and Toy Story 3 in 2010. In all of the films, the character was voiced by actor Tim Allen. The association of the name "Buzz" to Tim Allen holds some irony considering that Allen was arrested for cocaine possession in 1978 and drunk driving in 1997. Substances such as cocaine and alcohol are said to make the user "buzzed". 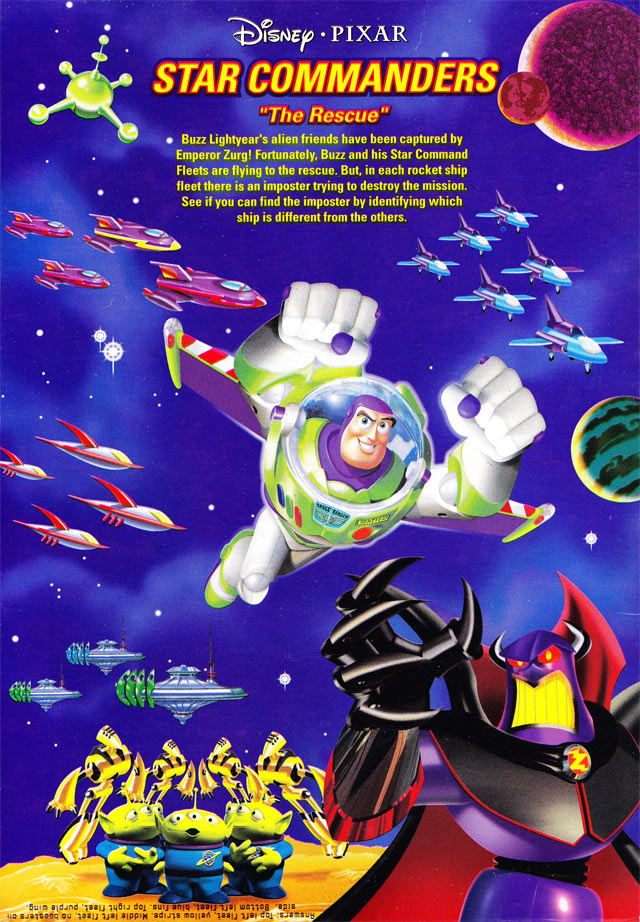 The side of the cereal box had the following text:

"Buzz Lightyear has a mission... to protect the universe from all the is evil. Buzz and the Space Rangers will always be there to save the day. You can become a Space Ranger by helping Buzz. Look at the back of the box and join Buzz as he goes 'to infinity and beyond' to defeat the world against Zurg and other intergalactic enemies."

The first 3 ingredients listed on the nutrition panel were corn and oat flour, sugar and graham pieces. 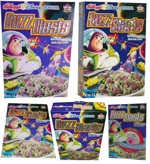 Submitter: Mr Breakfast
Uploaded: 3/18/2008
Additional details
Upload an image for this cereal
Comments About This Cereal
What do you think of Buzz Blasts?

Best cereal I've ever eaten. I miss it so much, and get strong cravings for it from time to time.

This was easily the greatest cereal I have ever and probably will ever taste. One of the greatest shames of the modern world that this will probably never return.

This cereal nearly killed me as a child. I looked it up after remember nearly choking to death on one of the flying saucers, likely would have if my father hadn't performed the Heimlich maneuver on me. I remember it tasting pretty decent but those saucers were just the right shape to get lodged in a child's throat. Cheerios and Froot Loops having the hole in the middle seem to be a smarter design choice.

I worked at the Leo Burnett company, Kellogg's ad agency in 2001 when this cereal was introduced. I actually named it (career highlight) and wrote the first Buzz ad with Pixar.

Will they ever bring back Buzz Blasts Cereal? I really, really want 2 buy & eat it again.

I want Buzz Blasts Cereal to come back. I really miss it & I really want to eat it again.