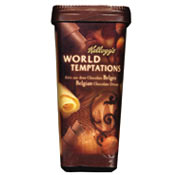 From: Kellogg's
Introduced in 1994

This is the official press release from November 11, 2004 announcing Temptations cereals:

"We believe that the taste of Kellogg's Temptations cereal will prove to be extremely popular with consumers -- especially those who look for indulgence in the foods they enjoy," says Alan Harris, executive vice president, sales and marketing, Kellogg USA.

Kellogg's Temptations French Vanilla Almond cereal is a delectable blend of light, crunchy flakes of white and yellow corn, natural almond slices and crispy clusters, all with a luscious French Vanilla coating. Kellogg's Temptations Honey Roasted Pecan cereal is a palate-pleasing combination of hearty flakes of toasted white and yellow corn and real honey roasted pecans. Both new varieties will be available in retail stores nationwide beginning in March of 1995.

These new taste sensations are a breakfast lover's delicacy and also make a sumptuous late afternoon or before-bed snack. In addition to delivering a bowlful of extraordinary taste for breakfast, Kellogg's Temptations cereals can add appetizing flavor and crunch to yogurt, cake and muffin mixes. Each variety also offers eight essential vitamins and minerals.

The introduction of Kellogg's Temptations cereals will be supported by an aggressive marketing plan, including heavy television and print advertising and national sampling efforts. Leo Burnett, Chicago, is handling the advertising campaign, which will focus on the product's innovative and "tempting new taste."

The main image on this page is of World Temptations. If you have an image of the U.S. version, please upload it and we'll make it the primary image for this cereal. Thanks!

Submitter: Mr Breakfast
Uploaded: 3/13/2008
Additional details
Upload an image for this cereal
Comments About This Cereal
What do you think of Temptations?

Absolutely the best snack-cereal of all time.

I used to buy at least 5/6 boxes of cereal at a time. This 'Temptation' (roasted pecan) was my all time favorite, no other cereal can come close to the way this cereal made me light up when I would see it on the shelf. I introduced it to my neighbor but she did not think that she would love it until she tasted it. She was hooked. I was extremely heart broken when I learned that the cereal was discontinued in my area. I have searched and searched for this cereal, but has been so unsuccessful in finding it. I would love to have at least 1 box of this awesome Temptation cereal again just to see if it still taste the same.

Wow - so great to see this image. I live in Australia now but used to work for a Kellogg's ad agency in London and produced the ad campaign for the launch of this in the UK. Gee it was awesome - we would pig out on it all day in the office. The campaign you have here was shot in Blake's Hotel in London. Happy days! - Kenny Hill

I miss them so much. I would pay twice the price to eat them again :(

I would do time for this stuff!!

My point exactly. I still have dreams of the smell and taste. I wish they would bring them back even it was just during the holidays so I could stock on them.

Best cereals ever! Why the hell did they stop selling them in France!!!!????