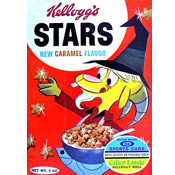 
This cereal can also be found under the name Frosted Sugar Stars, although, often, the word "frosted" was so small that many called it, simple, Sugar Stars.

Under the name Frosted Sugar Stars, the box described the cereal as "sugar toasted oats".

In the early 60s, the name of the cereal was shorted to, simply, Stars. At this point, the box announced, "New caramel flavor." The cereal's mascot and cover model was then a bearded, pointy-hat-wearing character named Hillbilly Goat.

A later iteration of the box, which announced caramel flavor with the word "new" dropped, featured a half-sun character wearing a sleeping cap.

Submitter: jeffrey
Uploaded: 11/9/2010
Additional details
Upload an image for this cereal
Comments About This Cereal
What do you think of Stars (Caramel)?

I'll buy a pallet of the caramel flavor if they'd just bring it back. Been Jonesing for this and Crispy Critters for 50 years now.

I liked the moon on the cover of the box. Absolutely loved this cereal as a child. Can't find anything even close to it today.

LOVED this cereal. Some kids hated it and I used to trade to get it when the schools gave us breakfast. Great stuff.

This was my favorite cereal of all time. It had Huckleberry Hound on the box for a long time.

Would love for this cereal to come back. It was so good.

I used to get a box of Caramel Stars for Elementary school breakfast. It was the greatest tasting cereal that I have ever eaten to this very day, and that was way back in the 60s! Marty

This was the last of the series of Kellogg's star-shaped cereals. As I said a while ago while commenting with ALL STARS... when the cereal was dropped, I was terribly sad.

This was the best cereal. I used to eat it all the time. My kids would love this cereal today. Please bring it back!

I loved this cereal as a child. Great taste.