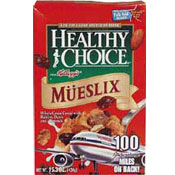 
In 1994, Kellogg's teamed up with ConAgra to create a line of cereals to be sold under the Healthy Choice label. This cereal wasn't one of them. According to a Kellogg's press release in 1994, "Healthy Choice from Kellogg's cereal is available in three consumer-preferred varieties, including multi-grain flakes, multi-grain squares and multi-grains raisins, crunchy oat clusters and almonds."

So we know this cereal was introduced after 1994 and before (or during) 2007, which is the date on the one box we've managed to find. This cereal has also been found in online purchase forms listed under the name "Mueslix Crispy Blend".

Upload an image for this cereal
Comments About This Cereal
What do you think of Healthy Choice Mueslix?
By EDit

How can I order this cereal. I went to eBay... but nothing shows.