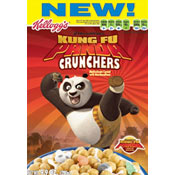 From: Kellogg's
Introduced in 2008


The full name of this cereal was DreamWorks Kung Fu Panda Crunchers cereal. It was described on the box as a "multi-grain cereal with marshmallow bits".

The main cereal pieces were round pieces similar to those in Kix cereal. The marshmallows pieces included orange fortune cookies, yin-yang symbols, white panda bear heads and green pagodas referred to on the box as "training centers".

The cereal was a promotional tie-in for the DreamWorks animated feature film "Kung Fu Panda" which was released in U.S. theaters in June of 2008.

Company Description: Kellogg's was originally founded as the Battle Creek Toasted Corn Flake Company in 1906. The company's founder Will Keith Kellogg is credited with inventing corn flakes along with his brother John Harvey Kellogg. The company was renamed the Kellogg Company in 1922... Read on and see all cereals from Kellogg's
This cereal belongs to the following Mr Breakfast Cereal Families:
Kung Fu Panda Crunchers Cereal Theater

Now Showing: Kung Fu Panda Movie Trailer
Upload an image for this cereal
Comments About This Cereal
What do you think of Kung Fu Panda Crunchers?

I do not like this cereal. It's pretty disgusting to my taste.