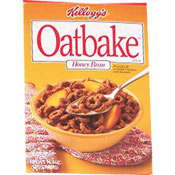 From: Kellogg's
Introduced in 1989


The whole oat cereal with the crunchy baked taste. We know that the cereal came in at least two different varieties: Honey Bran and Raisin Nut.

This cereal can best be described using dialogue from a 1989 commercial titled "Jake And Blake Awake To Kellogg's Oatbake". In the commercial, a couple (presumably married) lay propped up in bed behind a tray adorned with Oatbake cereal, a glass of milk and a flower in a vase.

Blake: Why is it milk you forsake when you partake of Oatbake?

Jake: I love Oatbake straight. Does that aggravate?

Blake: No. No. My little potentate.

Jake: May I demonstrate?

At this point, Blake samples the cereal.

Jake: So you appreciate?

Blake: Well, I didn't anticipate that a cereal straight would taste so great. 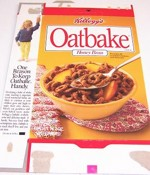 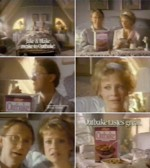 Submitter: Mr Breakfast
Uploaded: 9/26/2009
Additional details
Upload an image for this cereal
Comments About This Cereal
What do you think of Oatbake?

View all 34 comments for this cereal.

Oh Lord, bring it back! I haven't had a decent bowl of cereal since it disappeared! In fact, I quit eating cereal! I WANT MY OATBAKE BACK!

Please, please, please bring it back! I have never found any cereal that satisfied me so much!

Oatbake was not only a great breakfast cereal option, but I most often would eat it as a satisfying snack. I wish Kellogg's would reintroduce it to today's health minded society.

Unequivocally the best cereal ever made. I used to order it by the case from our grocer as it's distribution began to taper. Very disappointed to see it go but grateful to have enjoyed it so much!

One of my all-time favorites.

I just got off the phone with Kellogg's, begging them to bring back Oatbake. YES, I agree, best cereal ever!

All about the taste... one of the best ever! I would LOVE to see Kellogg's bring it back!

Is there a parallel these days, with maybe a little less excessive caloric punch as found in Cracklin' Oat Bran?

This was the best! Kellogg's - bring it back!

Omg, how I miss my Oatbake Cereal! With it, I never needed Linzess or Milk of Magnesia! The taste was the most astounding of any cereal ever!

View all 34 comments for this cereal.