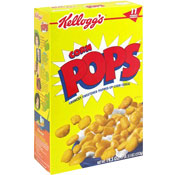 From: Kellogg's
Introduced in 1950


This cereal has been described on the box in the following ways: