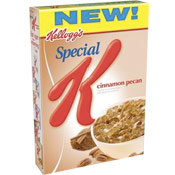 
This cereal was launched in December of 2007. It's been described on the box as "crunchy rice & wheat flakes with pecans & cinnamon."

The first five ingredients listed on the side panel are rice, whole grain wheat, sugar, pecans and wheat bran.

A 2008 press release from Kellogg's described it like this: "Special K Cinnamon Pecan cereal contains light, crunchy rice flakes with the delightful taste of cinnamon and real pecans, and offers weight managers another great tasting option without sacrifice."

Upload an image for this cereal
Comments About This Cereal
What do you think of Special K Cinnamon Pecan?

Couldn't find very many pecans in it.

I really like this cereal. Could you make it without sugar?? for people who cant tolerate sugar or want to use a substitute....

I'm addicted to this cereal. It is absolutely wonderful! The cereal doesn't get soggy and there's just enough pecans and cinnamon.

I was expecting more of a nutty flavor, but all I got was a mouthful of cinnamon, which was not to my liking. There was WAY too much cinnamon, not enough pecan.

I love this cereal!