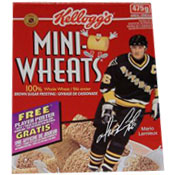 In 2011, Kellogg's website had this to say about the cereal: "Sure it's unfrosted, but that just means that there's nothing hiding what it is all about; helping to keep your kid full and focused with eight layers of whole grain fiber."

So keep your kid full and focused and try it sometime.

Upload an image for this cereal
Comments About This Cereal
What do you think of Mini-Wheats?
There are no comments yet for this cereal. Be the first! Was it good? Was it bad?
Do you have information not included in the article? Let the world know!