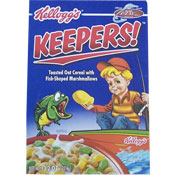 From: Kellogg's
Introduced in 1997


This cereal was described on the box as a "toasted oat cereal with fish-shaped marshmallows." It was the "Official Cereal of the FLW Tour."

F.L.W. stands for Forrest L. Wood, the founder of Ranger Boats and a self-made pioneer of modern bass fishing. The FLW tour is a series of sport fishing tournaments. It was sponsored by Kellogg's and Wal-Mart the year this cereal was inroduced.

Keepers! had a very limited distribution and was sold almost exclusively in Wal-Mart stores. 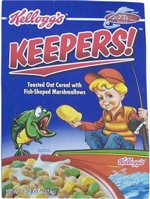 Submitter: Mr Breakfast
Uploaded: 4/27/2010
Additional details
Upload an image for this cereal
Comments About This Cereal
What do you think of Keepers!?

Fish shaped marshmallows! That's hilarious. Now that sounds appetizing. I've never seen this before. Was it national? I kinda doubt it.