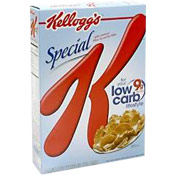 
This cereal was first announced in July of 2004. It consisted of lightly sweetened wheat, soy and rice flakes. The complete name of the cereal was "Special K For A Low Carb Lifestyle".

Each serving provided 10 grams of protein, 9 grams of net carbs and 5 grams of fiber.

A Kellogg's press release announcing the cereal said it would "provide consumers with a low-fat, delicious way to limit carbohydrate intake while enjoying a healthy breakfast." That press release also announced the debut of Keebler Chips Deluxe Carb Sensible Cookies.

Upload an image for this cereal
Comments About This Cereal
What do you think of Special K Low Carb?
By lo-carb5

It seems to have disappeared from the markets in metrowest Boston.