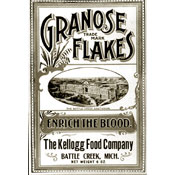 From: Kellogg's
Introduced in 1895


This cereal was created by Dr. John Kellogg. When conceived, it consisted of boiled wheat that had been run though a pasta-flattening device. Once baked, the wheat berries had a semi-crispy, flaked texture and appearance.

Granose is widely considered to be the first flake cereal ever created.

Version two is slightly more fun. According to Will Keith Kellogg, he was assigned by his brother to develop a bread substitute to compete with Shredded Wheat which had just become popular in the U.S.

Experiment after experiment failed. Exhausted, Will Keith called it quits one night - inadvertently leaving a batch of wheat soaking in water overnight.

However in the annals of cereal history - for all his great offerings - Dr. John Kellogg was a sort of quack.

When he (and/or his brother) created the first-ever wheat flakes, Dr. John wanted to crumble the flakes and sell them as crumbs. It took the foresight of his brother Will Keith to sell the cereal as flakes.

Upload an image for this cereal
Comments About This Cereal
What do you think of Granose Flakes?

I loved this cereal as a kid, I think it was off the shelf by the time I was in my early 20's (I'm 59 now...), sorry to see it gone. As for DuanEdwarDimock's comment, Granose was still around circa 1980, so maybe Old Time isn't as old as you might think? Anyway, as I remember it had a more distinctive flavour and it was more expensive than the similar weet-bix and vita brits, perhaps that was the reason for its demise.

Hmmmm, seems like Old Time must be the oldest person in the world. What a memory, from 110 years ago!

This was the BEST breakfast cereal. I am devastated that it is no longer available. It had a flavor not as harsh as Weet Bix, more delicate and very tasty. I often ate it dry with butter and jam as a snack after school. With milk for breakfast it was a great start to the day.