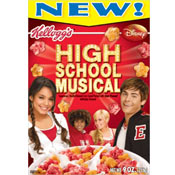 From: Kellogg's
Introduced in 2008


This cereal was described by Kellogg's website as "sweetened, vanilla-flavored corn cereal with star power". The cereal pieces are shaped like stars and come in both tan and pinkish-red colors.

High School Musical Cereal has been reviewed on MrBreakfast.com. 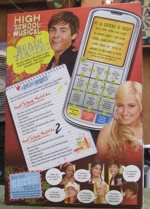 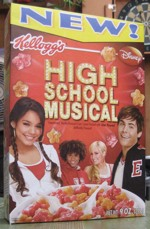 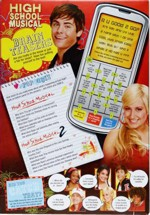 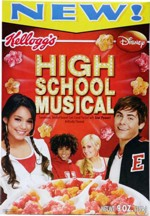 Submitter: Mr Breakfast
Uploaded: 10/6/2008
Additional details
Upload an image for this cereal
Comments About This Cereal
What do you think of High School Musical?

As a massive fan of the franchise, I eagerly awaited this cereal. I was very disappointed and do not recommend for any true High School Musical fan.

This is the best cereal in the world. I'm totally joking. It really wasn't very good at all. It was supposed to be vanilla, but it just tasted like sugar.

This stuff was actually pretty good. A year or two after it was released, they changed the name and box to Camp Rock cereal (seriously), but it was the exact same food. Don't judge just because it's HSM. It had a lightly sweet taste and crispy texture. Excellent as a dry snack and pretty good with milk. Although I do agree with Libatius, I've wanted Harry Potter cereal for a long time!

Seriously!? This movie got a cereal and there's never been any cereal for Harry Potter or Twilight. That doesn't make any sense at all. I want a Harry Potter cereal!

I liked the movie more than the cereal. I didn't like the movie very much.