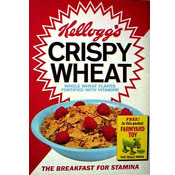 
Crispy Wheat Cereal was produced in the U.K. It is included in the encyclopedia of U.S. cereals because it is often mistakenly included in lists of cereals from North America.

In 1964, Crispy Wheats cereal included a prize of a small plastic cow and a tiny plastic bucket. The cow and bucket combination was available in at least 8 color variations. Additional prizes that year were a plastic egg with ducks, a plastic farmer with a bail of hay, a plastic horse with a sheriffs badge and a plastic dog with a food bowl.

Recently, we've found evidence that this cereal may have been available in the U.S. - at least in single serving boxes. If anyone has information about this cereal's existence in the U.S.A., please leave a comment..

Upload an image for this cereal
Comments About This Cereal
What do you think of Crispy Wheat?
By Norton Radstock

This cereal actually does exist in the US. It's not made in a factory in the US though. It was shipped from the UK to the US and you can get it in specialty stores across the US. I hope that helps. It tastes okay it doesn't have much flavor.