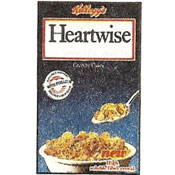 From: Kellogg's
Introduced in 1989


From an old coupon, we've discovered that Heartwise cereal came in at least two varieties.

A 1990 New York Times article revealed that the cereal's packaging may have included a little white lie:

"Health officials in several states have pulled Kellogg's Heartwise cereal off the shelves, saying the packages falsely imply that the cereal can prevent heart disease. Heartwise contains the grain psyllium, proven to reduce cholesterol but not necessarily with the amounts in a bowl of the cereal."

Submitter: Rural Muse
Uploaded: 1/30/2010
Additional details
Upload an image for this cereal
Comments About This Cereal
What do you think of Heartwise (Kellogg's)?
There are no comments yet for this cereal. Be the first! Was it good? Was it bad?
Do you have information not included in the article? Let the world know!