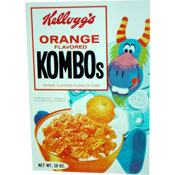 From: Kellogg's
Introduced in 1969


This cereal was promoted on the back of the box as "a 'just-right' combination of crisp flakes of corn 'n the flavor or real oranges."

The mascot who appeared on boxes for all three varieties was Blue Gnu, a striped-horn gnu in a cool blue sports coat. According to Blue Gnu, "Kellogg's Kombos put more in your morning. Get G-Gnawing on them soon!" 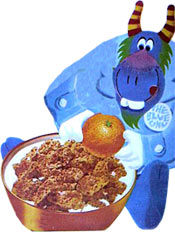 A gnu (also called a wildebeest ) belongs to the antelope family.

While it's true that a gnu (pronounced "gun-oooh") is prone to eat grains like those found in KOMBOs cereal, it is very rare to find an actual gnu with striped-horns and a suit jacket. 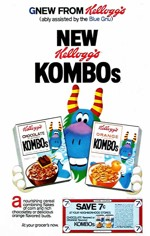 Submitter: DeeJay
Uploaded: 9/15/2008
Additional details
Upload an image for this cereal
Comments About This Cereal
What do you think of Orange Kombos?

If the orange flavor is not too tangy or over-powering, why couldn't this be an adult cereal? I never tried it, so I can't rate it, but I think the idea still has possibilities.

I was six years old when this cereal appeared on the market. The chocolate flavor was very good, but the orange... well, I don't think I finished the inaugural bowl. As I recall, 1969 was the first and last year I ever saw or ate any flavor of Kombos.