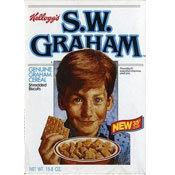 
Ads for this cereal asked the question, "What does the 'S.W.' stand for in S.W. Graham?"

In one television ad, the heads of two children come to life on S.W. Graham cereal boxes to offer possible answers.

"Stanley Willis... the outfielder for the Blazers."

"Maybe it stands for So What... as long as it tastes good."

The real answer can be found in a 2003 NPR interview with Carlos Gutierrez, a corporate vice president at Kellogg's during the cereal debut. According to Gutierrez, "S.W. was the name of the person, the initials of the person who invented graham." (Sylvester Graham 1794-1851)

The former VP and later CEO of Kellogg's also offered some insight to the cereal's untimely demise. "We launched a product... right in the middle of the oat bran craze, which was called S.W. Graham. It had nothing to do with oat bran, and consumers were looking for oat bran and anything that had oat bran sold -- and this was all about graham and the goodness of graham. That probably lasted six weeks on the shelf."

While we're saddened that S.W. Graham cereal didn't succeed, I'm happy to report that Carlos Gutierrez was appointed the 35th U.S. Secretary of Commerce in 2005. 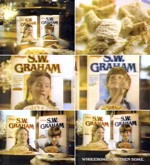 Submitter: Mr Breakfast
Uploaded: 4/1/2008
Additional details
Upload an image for this cereal
Comments About This Cereal
What do you think of S.W. Graham?

Best Ever. Please bring it back.

I ate this cereal for a while as a kid. I liked it very much! I no longer remember the taste, but I'd buy it again if Kellogg's brought it back.

The best cereal ever. Please bring it back.

Best cereal I have ever had in my life. Please bring it back.

It was the BEST ever. Anyone who says otherwise is a dirty liar, or possibly just someone who never had a chance to try it.

My favorite of all time!

My favorite of all time. I was in my twenties and bought it every time I went to the grocery store. Wish they would bring it back!

Kellogg's could have a huge throw back hit bringing this cereal back to the market. Test it out and prove those of us who love it wrong. It's a win/win for you. Huge success or get us off your back. We dare you... :-)

I really loved it as a kid. I wish they would bring it back so I could try it again.

My favorite cereal of all time - would love to see it come back!