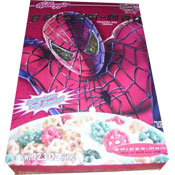 On September 26, 2002, Kellogg's issued a press release announcing the cereal and some other products to coincide with the movie's release. The following is from that release:

Available at supermarket and grocery stores nationwide while supplies last, Kellogg's; Spider-Man; Cereal and Kellogg's; Spider-Man; Pop-Tarts; represent the first-ever Spider-Man-themed breakfast food. The month-long promotion, in conjunction with the release of Sony/Columbia Pictures' "Spider-Man" the movie in theaters nationwide on May 3, involves a total of 11 Kellogg's product lines, including Pop-Tarts, Eggo Waffles, Rice Krispies, Cocoa Rice Krispies, Rice Krispies Treats Cereal, Smacks , Kellogg's Frosted Flakes, Apple Jacks, Corn Pops and Froot Loops. "At Kellogg, we're continually looking for ways to maximize the fun at breakfast - the most important meal of the day - for families with children," said Kevin Smith, Senior Vice President of Marketing Services at Kellogg Company. "We're thrilled to be able to bring the excitement of 'Spider-Man' the movie to the breakfast table through our new Spider-Man Cereal, Spider-Man Pop-Tarts and other fun promotional offers."

The Kellogg's Spider-Man promotion features the following products and offers:

Kellogg and Milk - The Superheroes of Breakfast

The Fun Continues with Other Exciting Spider-Man Offers from Kellogg

In specially marked boxes of participating Kellogg's products, consumers can receive even more fun Spidey stuff, such as four different collectible glow-in-the dark stickers sets, temporary tattoos and a Spider-Man water squirter wristband. Fans will feel like a real hero with their own Spider-Man water squirter wristband, available for a limited time in 25 million specially marked Kellogg's products. The water squirter features a wristband and shoots a water stream up to five feet by squeezing on the web-shaped palm-held water reservoir, just like Spider-Man's web. Fans can also look like a real hero in their own special edition Spider-Man T-shirt, available exclusively from Kellogg. The T-shirt, available in white or black in adult and youth sizes, captures the look and excitement of everyone's favorite wall-crawler and can be ordered by mailing $5.99 plus two proofs-of-purchase from specially marked boxes of Kellogg's Eggo Waffles and Kellogg's Pop-Tarts to the address indicated on the box.

It's interesting to note that there's one item in the press release that's not quite true. When they said their new products "represent the first-ever Spider-Man-themed breakfast food", they forgot about Ralston's Spider-Man Cereal which appeared on shelves seven years earlier.

Company Description: Kellogg's was originally founded as the Battle Creek Toasted Corn Flake Company in 1906. The company's founder Will Keith Kellogg is credited with inventing corn flakes along with his brother John Harvey Kellogg. The company was renamed the Kellogg Company in 1922... Read on and see all cereals from Kellogg's
This cereal belongs to the following Mr Breakfast Cereal Families:
Spider-Man (Kellogg's) Cereal Theater

Now Showing: 2002 Spider-Man Movie Trailer
Upload an image for this cereal
Comments About This Cereal
What do you think of Spider-Man (Kellogg's)?

I agree with Rusty2 that this cereal was like warped Honeycomb.

OMG! This is like my favorite cereal. I was 4 when i ate it, and I'll never taste it again but still.

I loved this cereal. Why? Because it was AWESOME!

I agree with Rusty that it was like Honeycomb but not nearly as good. I kept my empty cereal box for years, but it got wet in our garage one rainy season. The box was really cool. I'm still bummed out about that.

Decent cereal. Got old too fast.

This cereal was like warped Honeycomb cereal pieces with fruit flavor and I believe that Spiderman 2 cereal was the same exact cereal in an updated box. It was okay. I like Honeycomb better.