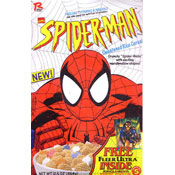 From: Ralston
Introduced in 1995


"One bite and you'll get caught in all the action of Spider-Man cereal."

This limited edition, sweetened rice cereal was a tie-in with the animated TV series Spider-Man which appeared on the Fox Kids Network. It was described on the front of the box as a "sweetened rice cereal (with) crunchy 'spider-webs' with exciting marshmallow shapes!" It was created in association with Marvel Comics.

The cereal consisted of Rice Chex style pieces (which were supposed to resemble "webs") and four different kinds of marshmallows. The side panel of the box described each of the marshmallow shapes. 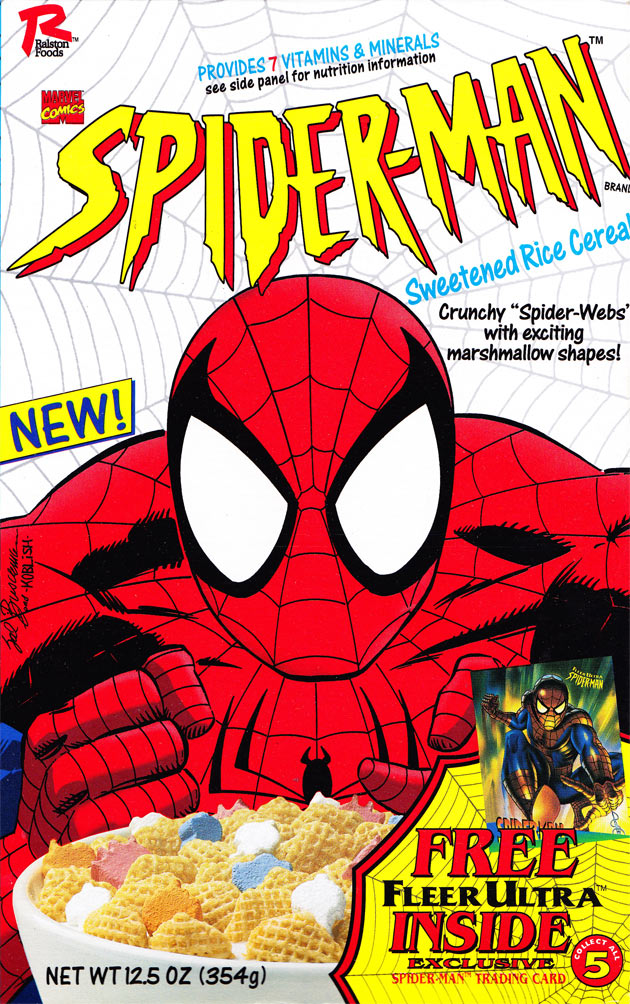 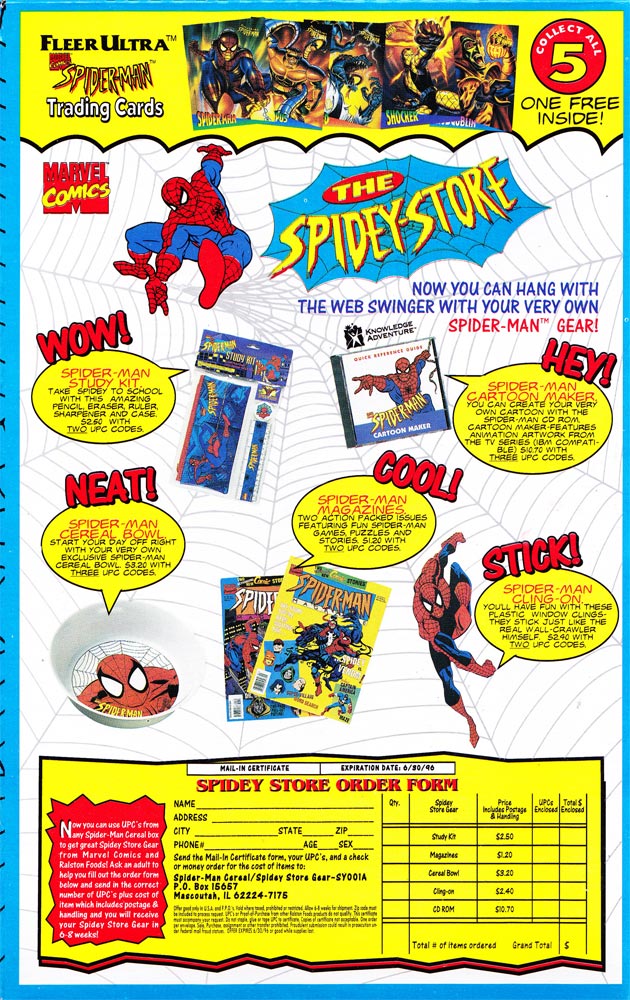 The box that we got our hands on offered one (of five) Fleer Ultra Spider-Man Trading Cards free inside. The back of the box featured "The Spidey-Store" where you could send away to to get a Spider-Man Study Kit, a Spider-Man Cereal Bowl, a Spider-Man Cling-On (window sticker) or other Spider-Man paraphernalia. 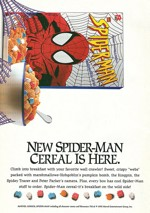 Submitter: marytheclown
Uploaded: 10/17/2008
Additional details
Upload an image for this cereal
Comments About This Cereal
What do you think of Spider-Man (Ralston)?

Like others have said... I don't care what the shapes of the marshmallows are... I just want the cereal back. TMNT and Spiderman were my two favorite cereals of all time and still are.

This was after Teenage Mutant Ninja Turtles cereal... same exact cereal, though.

I remember this cereal because it was the same as the Ninja Turtle cereal.

Oh Ralston. How I miss thee. They made the best cereals from the 80's and 90's. This Spiderman cereal was essentially the same as the Ninja turtles cereal. Very tasty. Too bad they don't bring this formula back and rebrand it for a new cereal.

Thanks for the new tip on how to recreate this cereal. I have been doing the Lucky Charms + Crispix combo but will add a little sugar to try. A labor of love for this, the greatest cereal of all time. I wrote the company... they said it didn't sell well. I can't believe it. It truly was the best coming from a guy who eats more than a lot of cereal. You can buy a box on ebay just to remember the good times.

A cereal that was the cornerstone of my childhood. After school, it was just cartoons, myself, and a bowl of this unrivaled masterpiece that was Spiderman cereal. The sheer thought that this cereal (and even the concept itself) went out like the dinosaurs, is only an intangible and lonely memory that everyone else feels when their cereal is off the market never to be seen again. If some miracle occurs, and this cereal returns to shelves in the form of a unicorn barfing rainbows; it still would not stop me from buying every box on the inventory list.

I was obsessed with this cereal as a kid. Luckily, I found that if you throw a bunch of Jet-Puft Mallow Bits (Vanilla flavored) into Crispix cereal, it tastes almost exactly the same.

I had this cereal one time when I was a kid and it was so good. I wish they would bring it back, Spider-man-themed or not. It was so good.