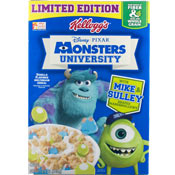 
The complete name of this limited edition cereal is "Disney Pixar Monsters University." It's described on the front of the box as a "vanilla flavored multigrain cereal - naturally and artificially flavored... with Mike and Sulley shaped marshmallows."

Mike and Sully are characters from the 2013 animated film Monsters University and its predecessor, 2001's Monsters, Inc.

In 2001, Mike and Sully were featured on a limited edition Kellogg's cereal for the first Monsters, Inc. called appropriately enough Monsters, Inc. cereal. As far as we can ascertain, that cereal was only available in Canada.

Sully (the furry one) appeared on the front of another cereal box in 2006... Blueberry Monster Crunch from the Disney Magic Selections cereal line.

Monsters University Cereal doesn't mention it on the box (it probably should), but the milk left in the bowl after a serving takes on a light green hue ala Frankenstein. 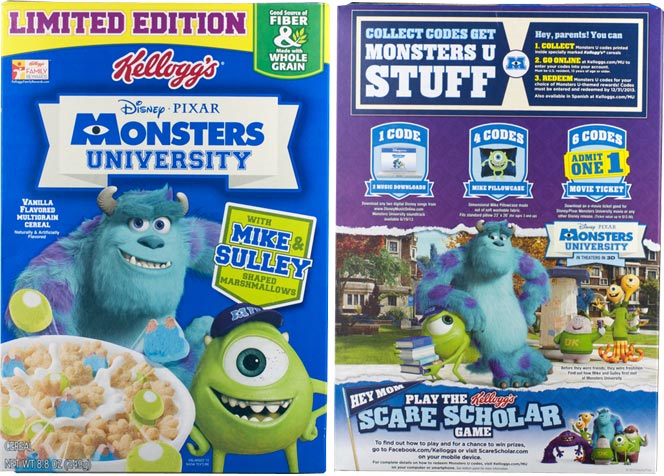 Monsters University is actually a rather interesting cereal. The cereal pieces are light and puffy with a distinct multi-grain flavor. When that combines with the sweet marshmallows, you get a contrast of flavors that's not very common in kid's cereals. The vanilla flavor is quite noticeable when the cereal is eaten dry. It becomes less noticeable when milk is added. Overall, I kind of liked this cereal. I give it 4 out of 7 golden eggs.


Click here to see all cereals from Kellogg's.
This cereal belongs to the following Mr Breakfast Cereal Families:
Upload an image for this cereal
Comments About This Cereal
What do you think of Monsters University?

I used to try this as a little kid and honestly now that I'm 14, I need to say that it's nothing new. It's just a generic movie tie-in version of Lucky Charms. But other than that, it was actually pretty alright knowing my parents never bought me marshmallow cereal at the age I tried this.