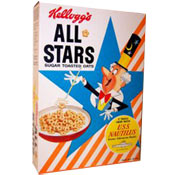 From: Kellogg's
Introduced in 1960


This "Sugar Toasted Oats" cereal appeared in the early 1960's and lasted only a couple years before it was transformed into Frosted Sugar Stars (circa 1963) and eventually simply Stars Cereal (circa 1964). As the cereal name was changed so was the nature of the cereal pieces. The signature hole in the center of the star shape was filled in the later renditions of the cereal.

According to the text on a complementary sample package of the Kellogg's All Stars, "Generations of robust Americans have breakfasted on oats. Now this traditional oat nourishment comes to you in a new sugar-toasted form and texture your whole family will enjoy. Offer them fun, flavor and good oat nourishment with new Kellogg's All-Stars every day - at breakfast or snack time." 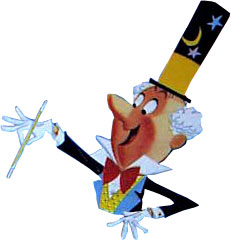 Whoo, The Wizard Of Oatz

Often just called "The Wizard", this cereal mascot was said to be responsible for creating the holes in the middle of All Star cereal pieces with his magic wand.

Created by Hanna-Barbera in the late 1950's, this character had his own television series on CBS, The Huckleberry Hound Show, before he started promoting Kellogg's All Stars as a cereal mascot. Huckleberry helped transition the cereal to its new name, Frosted Sugar Stars, by appearing on boxes of the cereal under both names. 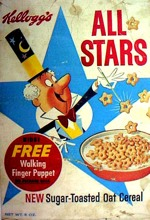 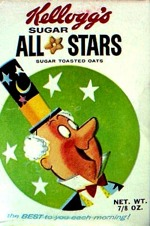 click to enlarge
All Stars Single Serving - Wizard Of Oatz

click to enlarge
Front And Back Of Box Of All Stars 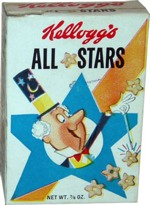 click to enlarge
Individual Serving Box Of All Stars

Submitter: Mr Breakfast
Uploaded: 3/13/2008
Additional details
Upload an image for this cereal
Comments About This Cereal
What do you think of All Stars?

Kellogg's lost their best cereal when they dropped this one!

My favorite cereal when I was a kid was All Stars and Kellogg's stopped making them. I was on holiday in Majorca aged 10 in 1966 and the hotel had variety packs with All Stars among them. And England won the World Cup! Bring back All Stars. - Nick

Terrific cereal! As a kid in the UK, I was only treated to All Stars at my Grandma's home, as she loved to spoil us for just a few days each year. The rest of the year I had to face boring old Cornflakes, Rice Krispies and Wheatabix.

Whoo dotes on oats, on oats he dotes, and toasty stars he sugar coats, who puts the holes in All Stars? Whoo! That's who.

I still remember just how they tasted and wish I could buy them again. My Grandmother bought them for my cousin as they were his favorite - so I only got them when we went to stay.

Best cereal ever! The nearest tasting cereal now is Cripix or Chex - but only imports from U.S.

There was an unsweetened version of this called Twinkles. It had an elephant of that name and had a storybook on the back of the box.

I remember All Stars as a kid. Besides it's nostalgic feel for me, I remember the taste as I remember it back in the 60's. - Darryl1

I would like this breakfast cereal back as it was in the 60's as it was a favorite of mine.

When I was a kid, The Huckleberry Hound show was not a CBS program... it was aired in syndication on Local stations.