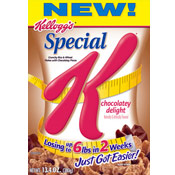 
This cereal has been described on the box as "naturally & artificially flavored crunchy rice & wheat flakes with chocolatey pieces."

The cereal was promoted as a breakfast and as a snack that could satisfy a dieter's craving for chocolate. The Special K website said, "Get your chocolatey fix without undoing your day!"

The first four ingredients listed on the side panel are rice, whole grain wheat, sugar and chocolatey chunks.

Special K Chocolatey Delight Cereal has been reviewed on MrBreakfast.com.

This cereal tastes very good... I believe if it wasn't marketed towards 'healthy adults' then this could be one of the all time greats.